By Andy from Disabled People Against Cuts

What a fantastic success!

Thanks to all of you who turned out to support the action by Disabled People Against Cuts, Disabled People’s Direct Action Network and UK Uncut in the West End on Saturday. The action was designed to create a space where disabled people could have their own voices heard about the terrible impact that the Welfare Reform Bill will have on some of the poorest, most isolated people in this country.

Hundreds of people came from as far away as Edinburgh, Manchester, Cornwall, Sunderland and Birmingham to be part of the largest disabled people’s direct action for years, bringing truth to the saying, “if you build it, they will come.”

At 12 o’ clock, dozens of disabled activists supported by members of UK Uncut blocked off the corner of Regent Street and Oxford Circus by running chains across the road, and linking to the chains through d-locks attached to people’s wheelchairs. In one well-practised action, carried out in seconds, we had taken over the West End. Central London’s main shopping district was on lockdown – and we had the keys! We were soon joined by hundreds more anti-cuts campaigners, including a samba band who kept the energy up through the protest.

Police turned up to help us by shutting off the roads we hadn’t blocked, which was very public spirited of them. They then asked us how long we wanted to stay, and accommodated us for the next two hours. They even asked if we would give up one lane of traffic. I think it was because they wanted to stage their own demo alongside us. It’s just a shame they didn’t bring their banners.

Those who did bring their banners included Disabled People’s Direct Action Network, Black Triangle, Mental Health Resistance, London Autistic Rights Movement, Occupy LSX, Mad Pride, Winvisible, Single Mother’s Self Defense, Right to Work and many many more. There were lots of speeches from disabled activists and anti-cuts campaigners, and some catchy (and not so catchy ) chanting. The atmosphere was fantastic, and we had a great response from the passing public.

Media coverage was huge. We dominated local and national lunchtime/evening bulletins, rolling news channels, and radio and online outlets all day. We had some fantastic testimonies as to why people were on the action, and some very powerful arguments as to why this bill has to be stopped. We came to show we mean business, and that we won’t take their plans for us lying down. Having made our point, we decided to let London have its streets back and left as one at 2pm. And in the age-old tradition, following our activity we went to the pub. 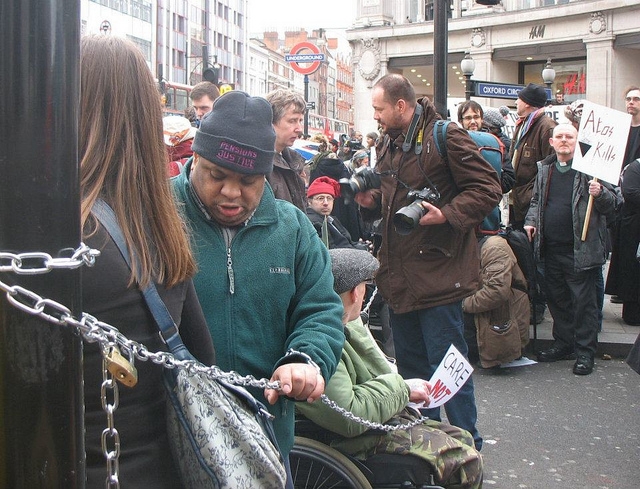 Rome wasn’t built in a day. And these terrible cuts won’t be stopped in a day either. This was just the first in a series of planned joint actions with the anti-cuts movements, as part of an on-going wider campaign over the next few months to show that we have power to resist, and that we aren’t afraid to exercise it. So watch this space.

Until next time, here are some ways you can help:

If you can make it to London on 13th February, attend this action:

We really need your support to challenge the fact that cutting the fund puts over 20,000 disabled people with significant support needs at risk.

Go to dpac.uk.net – educate yourself, join up or support our campaigns in any way you can.

Write to your MP: @writetothem.com or House of Commons, London SW1A 0AA and tell them to oppose welfare cuts.

Seek out disabled activists in your local area, and form a branch of DPAC.

Here’s a round-up of media coverage on the day.

We also got in the print editions of the national Sunday papers: Mail on Sunday, Mirror (a photo on page 2!), Observer, The People (also a photo on p2) and Daily Star (photo on p6).

Thanks again for all the support and messages.