This is a guest post by Nicholas Shaxson, a journalist, writer, consultant, and author of Treasure Islands: Tax Havens and the Men Who Stole the World. 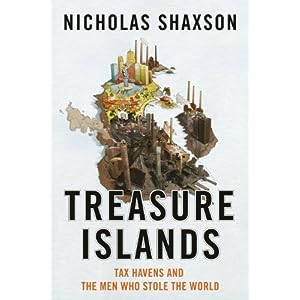 A few days ago Ben from UK Uncut requested a blog piece, asking for some thoughts about the movement and where it might be headed. “We don’t have any money, little expertise and we’re kind of winging it,” he said. “But it seems to be going well and we seem to have hit a nerve.”
Absolutely – and it has hit the right nerve. This is, for me, the most exciting, original and well-aimed street protest movement I’ve seen.

But UK Uncut probably can’t keep shutting shops forever. Is this a beautiful firework display that temporarily lights up the night sky? Or is this the start of something bigger, stronger and more enduring?

The whole world needs you
I am not exaggerating when I say that the whole world – not just Britain – needs UK Uncut.
Britain is ground zero for the biggest part of the global offshore system. Here’s a very brief overview of how it all works. First, ordinary Britons are losing billions to tax havens through the legal and illegal dodges of wealthy individuals and corporations. Corporations and wealthy individuals get poorer British people to pay their taxes for them, and money effectively flows out. Second, Britain is a tax haven in its own right too. It controls a network of tax havens around the world – from Jersey to the Caymans – which hoovers up money from around the world and funnels it into the City of London.

But the offshore money flowing into Britain does not compensate for the outflows. The inflows have created too-big-to-fail banks, crowded out manufacturing; boosted inequality; blown wasteful property bubbles, corrupted markets, provided secrecy to cover up all manner of crimes, and put our politicians ever more in hock to a rampant City. Some of Britain’s finest minds are wasted on designing complex offshore tax strategies and the dangerous financial activities associated with ‘light touch regulation.’

Then there is the harm Britain’s tax havens wreak on other countries around the world – which is an even bigger story.

This is the great untold story of globalisation. My book Treasure Islands: Tax Havens and the Men who Stole the World lays all this out in organised detail for the first time

The key point here is that tax avoidance by big multinationals is just a part – albeit a very important part – of a bigger and even nastier picture: tax havens and the global offshore system. This is massive. Tax havens and offshore finance have been metastatising through the global economy since the 1970s: the unseen component of financial globalisation. They lie at the heart of the global economy. Half of all world trade passes through tax havens.

This is not about a few celebrity tax-dodgers, spivs and mafiosi: as UK Uncut has recognised, this is also about multinational corporations – and, most importantly, about banks. Recently the Mail on Sunday found that Barclays, Lloyds and RBS have over 550 tax haven subsidiaries between them.

If UK Uncut wants to become a big, enduring movement then it is important to see how the jigsaw fits together. UK Uncut is tackling one important part. It can now widen its perspective to encompass the rest. Then the possibilities for creative protest – and many other forms of action – begin to proliferate.

The time for change is now
In the past year or so, something in the zeitgeist has changed in Britain. The government’s shocking austerity programme – to which UK Uncut is offering a clear and unambiguous alternative – is part of the reason. But there is more. Some obscure history might help identify the opportunity now at hand.

In 1986 John Christensen, a native of the British tax haven of Jersey, returned to Britain after working overseas and resolved research the tax havens. He combed libraries and asked all the experts. ‘There was no useful information anywhere,’ he remembers. The offshore system was invisible.

Going home to Jersey, he went under cover. He worked first in an accountancy firm then became the tax haven’s Economic Adviser, (and started a family). He left in 1998, worked in a private firm in London while doing more tax haven research, until 2002 when three Jersey dissidents visited him at home, and asked him to “rescue our island” from its capture by the offshore finance industry. By November 2002 he and a few others agreed to found the Tax Justice Network, with the aim of taking on the tax havens. They soon joined up with highly effective campaigning chartered accountant Richard Murphy.

It was hard to start with. “In 2005 were were treated as radical eccentrics,” Christensen remembers. “I got a strong sense of ‘oh, not them again, wittering on about tax havens: go away, we’ve got important work to do.’ ” In the media, in academic circles, in the wider public, the issue was dead. But, bit by bit, the lights began to go on in people’s heads. I began working with them in 2007, and have watched as the network’s profile has risen steadily. We were all elated to see UK Uncut emerge, spontaneously, late last year. For us it marks the start of a new phase of public interest and engagement.

There is a whole new field of economic and political analysis being developed here, and a whole new way of looking at the world. We have discovered that you can kill the defenders of offshore finance, with the force of our arguments. Until organised resistance to tax havens appeared in the last three or four years, the lobbyists could spout the most fatuous arguments, and nobody stood up to point out the idiocy of their positions. That has now changed. Intellectually, the defenders of tax havens haven’t a leg to stand on – though some of their arguments are admittedly a bit slippery. Watch Christensen debating against City lawyers and financiers: it is a joy to behold. (The Tax Justice Network has a whole elaborate website and blog dedicated to this; I dissect most of the basic tax haven arguments here; and next week we start a new project in earnest, to start to make our materials more accessible to a wider public.) It’s hardly surprising that a senior (anonymous) company executive recently confessed that “This [UK Uncut] is the most difficult communications issue I have ever faced.”

Few members of UK Uncut, I imagine, understand the full details of the multinationals’ deliberately complex tax shenanigans. But all grasp the basic point: that these corporations are using tax havens to wriggle out of paying taxes, and the rest of us must pay their taxes for them or see our public services crumble. That this is an alternative to austerity.

My humble advice to UK Uncut, then, if I may, is this. Keep at it: this is an issue whose time has come. The arguments are on our side. One step at a time, keep learning, never lose sight of multinational tax avoidance, but expand the focus beyond that, to understand the whole system of tax havens.

We in Britain have a special responsibility: our lawyers, our bankers, our accountants and our politicians have led the way in creating the modern global offshore system. This is probably the biggest single reason why poor countries remain poor, and why Britain is so unequal. If we don’t do something about this, we are all complicit in what I would argue is the biggest crime in modern economic history.