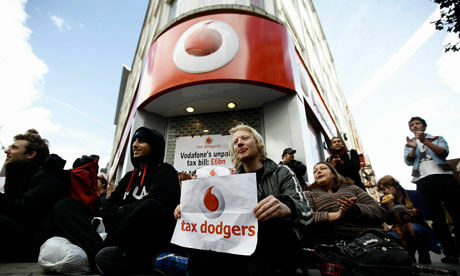 Wealthy individuals buying tax avoidance schemes from high-flying accountants, in order to put as little money as possible into the public purse, are clearly acting immorally. However, this is not just a case of a few bad apples, this is a systemic problem because tax avoidance has become an industry in this country.

David Cameron has the power to act. The law must be changed to stop this unfair and unjust behaviour. We are losing £25 billion every year through tax avoidance- clamping down on tax cheats would provide a real and credible alternative to the government’s massive public sector cuts.

Instead, the burden of debt reduction is falling on those least able to pay, while Cameron cuts the 50p tax rate, lowers corporation tax and changes complex CFC rules to legalise the use of offshore tax havens.

We’ve come a long way since our first protest in Vodafone’s flagship store on Oxford Street in October 2010. Back then we stood with a range of other tax and anti-cuts campaigners, protest groups and unions demanding that Vodafone pay back the £6 billion in tax they avoided.

Our demands remain the same. The government must make Vodafone, Phillip Green, Amazon, Google, Barclays, Goldman Sachs- and all the other mega-rich individuals and corporations raking in massive profits- pay their fair share in tax. They must invest the money they raise in our public services, stop the cuts, and protect our jobs, pensions, welfare and other public sector goods and services. And they must do it now.