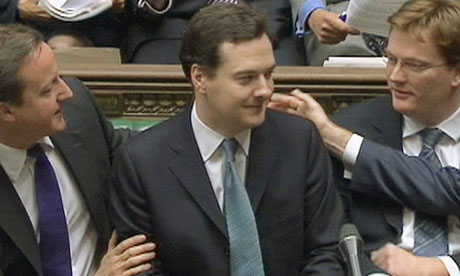 George Osborne thought his smokescreen was working. It looked for a while like the people of Britain were going to accept the biggest cuts to public spending seen in the Western world in a century. He had, it seemed, delivered a sleight of hand that would impress even the most slippery magician.

The trick he’s been using to great effect is, though, an old one. It works something like this: in a crisis, people panic. They accept something big has to happen to solve it. But massive crises are complex, and a global economic collapse is particularly hard to understand – we aren’t taught the basics of economic history at school, we learn that these are matters for clever men in suits who use long words.

And so what George Osborne spotted is what right wing politicians around the world have known for the last 40 years: a disaster is a great time to radically change a country. From the privatisation of New Orleans’ schools after Katrina, to the corporate plunder of Iraq after the 2003 invasion, this trick is nothing new. Naomi Klein’s book The Shock Doctrine describes in detail how it has been used the world over.

There is a big problem. People understand this might require a big solution. And so they accept policies they would never normally countenance – policies not designed to solve the problem, but to radically change society in a way no one ever voted for.

And like this sleight of hand, Osborne’s “solutions” too are nothing new. The Conservative students I studied with at university – the generation who were born under Thatcher, and are now the researchers and aids to this government – were arguing for 30% spending cuts long before the recession. And their predecessors did too – in fact, in 1910, the Conservative Party brought down the Government rather than allow the people’s budget, the foundation of the welfare state, to pass. And they have used every opportunity since to rid this country of what they see as a dangerous socialist experiment.

And this “solution” is, of course, nothing of the sort. The idea that you solve a deficit caused by unemployment by cutting jobs is economically illiterate. Don’t take it from me – look at what is being said by the world’s leading economists, including most recent Nobel prize winners: Britain is embarking on a radical economic experiment which is not only un-necessary, but probably going to make the recession worse.

But because people have been taught that economics is too complex for us, many people seem to stop listening when you try and explain why the cuts are a bad idea. And I’ve tried lots of ways:

I’ve tried explaining that the Treasury’s debt really isn’t that big: it was bigger for most of the 20th century, and, compared to the size of our economy, is one of the lowest on earth.

I’ve tried to explain that most of the debt is owed to people in the UK: our pension funds buy government bonds. If, as the Tories predict, borrowing did get more expensive, that would just mean that Britain’s pension funds would get fatter – money the Treasury could tax back.

I’ve tried pointing out that the borrowing isn’t getting more expensive, but cheaper. And this is extra-ordinary. Before the election, the excuse that they gave for cutting public spending was that they believed we’d be punished by the bond markets if we didn’t: investors wouldn’t buy government bonds. They were wrong. What has actually happened is that investors have decided that they don’t want to risk buying shares in companies which might collapse, and so they have rushed to buy government bonds. As a result, borrowing is cheaper than it’s almost ever been. The reason they gave for cutting has evaporated. They were just plain and simple wrong.

And I’ve tried explaining the multiplier effect. The way out of a recession is to invest in jobs. Once you’ve created a job, that person buys stuff and pays taxes. The Tories like to compare the national economy to a household. But, when I buy stuff in the shop, I don’t get lots of the money back in tax. And I don’t get even more back in tax when the shopkeeper buys her stock or pays her staff. And again when the staff buy things, and so on. And so the way out of the recession is to look at the real problem – unemployment – and take advantage of record cheap borrowing, by investing. As Nobel winning economist Joseph Stiglitz – former economist for both the World Bank and Bill Clinton – tells us, cutting now could well lead to higher long term debts.

I’ve pointed out that we tried this all before. Cutting spending to pay the debts of WW1 caused the great depression. Building the welfare state allowed us to build our way out of the debts left by WW2.

And I’ve reminded people that it wasn’t public spending which caused this crisis, but listening to crazy right wing ideologues like George Osborne who thought that we should shut down everything and hand our economy to the bankers.

And I’ve tried explaining that public services aren’t a cost to the economy but an investment in the civilisation which makes our economy possible. If we don’t invest in them now, we make our future economy less prosperous, and this will cost far more than our record cheap, very low debt.

And I’ve pointed out that the impending climate crisis means we urgently need to invest to create jobs building a new economy – this can’t wait, and the legacy we leave if we don’t will be unimaginable.

And I’ve tried many more arguments besides. And these arguments work – sometimes. A little discussion of why the great economists of our age think that George Osborne is either mad or bad or stupid often does leave people convinced.

But many turn off at the wiff of a discussion of economic theory. And you don’t get the chance to have that little conversation with everyone in Britain.

However, there is one more argument: one I haven’t yet mentioned, which doesn’t require so much explanation – an argument which convinces almost all who hear it. A fact so compelling that once shouted, it will echo throughout the country:

If the mega-rich who caused this crisis paid the same level of tax as you and me, we wouldn’t have a deficit.

And of course, all of these arguments are what the Labour Party would be explaining, if they were brave enough to challenge Britain’s entrenched corporate power. But they aren’t. And so, with the noble exception of our one Green MP, and a few on the Labour left, it it falls to us, the people, to make this case.

But that’s ok. It’s ok, because this is nothing new. Public services were won by social movements who shouted, and screamed, and withdrew their labour, and occupied, and built new political parties, and, yes, smashed windows. And it’s ok because the fact that they don’t teach economic history in school doesn’t mean that we don’t remember this lesson. It was our grandparents and our great grandparents who won a state pension, who invented the NHS and who built affordable council houses. That was their legacy to us.

And it’s ok because our thanks to them will be to use the technology that our parents with their state funded education invented for us, to organise a resistance to the Tories so strong that our children will never forget. Because the history of Britain is a history of ordinary people fighting the Tories to win a fair share of our country’s wealth and power.

And as UK Uncut have shown, it is not a history that our generation will soon forget. Because people are realising that George Osborne’s smoke screen stinks. And as we blow it away, we will have a chance to learn the lesson Osborne teaches us, and take the chance to work out, together, what kind of country we want to build from the ashes, and leave for our grandchildren. And, if nothing else, that’s worth fighting for.