Vodafone stores around the country to be targeted by nationwide UK Uncut protests.

Vodafone branches up and down the country are set to be targeted this Saturday, 14th June, by anti-austerity group UK Uncut, in protest against the mobile giant’s tax avoiding practices. So far 7 protests are planned to take place around the UK, in locations including in Manchester, Grimsby, Cornwall, Peterborough and central London.[1]

Vodafone was UK Uncut’s first target in 2010, and the group say the government has still not done enough to stop them dodging tax. Protesters are demanding Vodafone to pay the billions in tax owed to the public purse. They say they will occupy Vodafone shops to transform them into homes, housing shelters and housewarming parties.[2]

This week several protests committed their support for the protests. In London the Focus E15 Mothers campaign, who are known for occupying council offices and show homes in East London, will join the protest. The protest groups say their actions will be disruptive, but that they are a necessary and proportional response to the government’s lack of action to provide affordable, decent housing for all.

Occupations will be staged to protest against to the government’s failure provide secure and safe homes. More than 215,000 households face eviction and 5.9 million homes in England fail to meet the Government’s Decent Home Standards. [3,4]

In London, protesters will meet at Cavendish Square, Soho at 10.45am, and during the action will transform a Vodafone into a house warming party with balloons, parachute children’s games and a creche.

UK Uncut state that a “national day of action” focused on Vodafone’s tax dodging activities is needed because the company still owes tax on a deal from 2011, which was reported to cost the UK treasury £6bn. The campaign group also claims that the mobile phone provider “hasn’t paid a penny of corporation tax since 2011”,[5] and that forcing tax avoiders to pay their tax could avert a looming housing crisis in the UK.

Vodafone was the first company to be targeted by a series of high-profile protests by UK Uncut for avoiding a £6bn tax bill in 2010.[6] The action is due to take place just six weeks before Vodafone’s AGM and less than a year before the general election in which the government’s record on tackling tax avoidance while slashing public spending will be centre stage.

UK Uncut activist Kay Stevens, 28, said “The government have spoken tough but acted way too weak on tax dodging by millionaires and rich companies. Meanwhile our millionaire government is overseeing cuts to housing benefits, the bedroom tax and rocketing rents which are forcing people into desperate situations. Vodafone’s dodged taxes could pay for safe and secure housing for the people who need it most”

Jasmine Stone, a member of Focus E15 said: “We’ll be at the VodaHome action with UK Uncut because there is not enough social housing being built and there should be enough for everyone”

[6] UK Uncut first accused Vodafone of avoiding a £6bn tax bill relating to the purchase of German engineering firm Mannesmann in October 2010. At the time, the claim was dismissed by the company and HMRC as an ‘urban myth’. In 2011, however, a parliamentary committee said the deal ‘may have been illegal’ and could have been worth up to £8bn. The deal will now be investigated as part of the judge-led review of corporate tax deals struck by HMRC. See 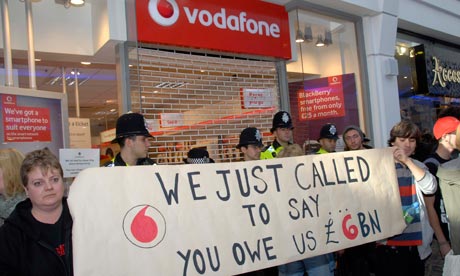 This is a guest blog post by Danny Chivers, who is part of both the Reclaim Shakespeare Company and UK Uncut

Fighting the cuts and corporate power: a double-whammy weekend of action coming up!

There are two exciting direct action callouts for the weekend of June 14th/15th: a day of UK Uncut actions targeting Vodafone’s tax-dodging on Saturday 14th, and a “Viking flash-horde” at the British Museum in protest at BP sponsorship on Sunday 15th, organised by theatrical activists the Reclaim Shakespeare Company.

These may seem like quite separate issues, but in fact they are deeply interlinked, and I’d recommend that anyone thinking of attending one should include the other as well and make a proper action-packed weekend of it.

Why? Well, beyond the initial fact that both offer the chance to do something inspiring and effective to shake off the post-EU-election blues, these two actions are tackling different parts of the same problem. They are linked by the Government’s brutal cuts agenda, and also by the growing problem of unaccountable corporations.

The #VodaHome action will highlight the cuts to social housing that are forcing more people into poverty, temporary accommodation and homelessness, and link this to the billions of pounds that the Government allows the likes of Vodafone to avoid in tax. The British Museum action, meanwhile, is part of a wider movement against fossil fuel sponsorship of the arts. Funding arts and culture gives the likes of BP and Shell a cheap veneer of responsibility that helps to distract from their real, destructive activities; not just their drilling and spilling, but their ferocious lobbying to block clean energy projects all over the world, keeping us trapped on a fossil-fuelled path to climate meltdown.

While fossil fuel companies have been giving money to some of our cultural institutions for many years, until now their contribution has been relatively small. For example, BP provides less than 1% of the annual income of the Tate, the Royal Opera House and the British Museum (although you wouldn’t know it from the huge amount of branding the company gets in return). Government cuts to public funding of galleries, theatres and museums mean that there is now a major risk that these institutions could drastically increase their reliance on corporate funding, locking them in as PR partners to dirty industries. Increases in fossil fuel sponsorship would also make it much harder to produce art that exposes these companies’ true nature; many artists are already afraid to speak out against their sponsors for fear of losing their livelihoods.

It doesn’t have to be like this. The weekend of June 14th and 15th gives us all a brilliant opportunity to challenge two different corporations who are benefiting from (and behind the scenes no doubt cheering on) the Government’s strategy of letting the rich off their taxes while hammering everyone else. These two days of action will highlight some of the terrible consequences of the cuts (a lack of affordable housing with all the misery and tragedy that entails, cheap unearned PR for climate-trashing industries and the corporate capture of the arts) while also putting forward the solutions (tax justice leading to decent public funding for social housing, the arts and everything else we’d expect in a decent society). Plus we’ll get to turn Vodafone stores into temporary housing and give BP a flashmob Viking funeral. How perfect a weekend is that?

To join the #Vodahome action, check UK Uncut’s actions page to find an action near you, or see the step-by-step guide on how you can organise one yourself. To join the BP Vikings flash-horde, sign up to the Facebook event or send an email to info@bp-or-not-bp.org and you’ll receive instructions!