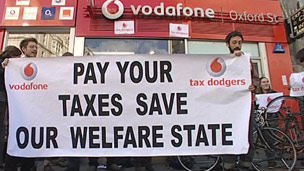 Tomorrow is Pay Day. Actions have been planned by hundreds of different people in 50 towns, cities and communities around the country.

Two months ago, on October 27th about 65 people ran along Oxford Street, entered a Vodafone store seconds after it opened for the day, sat down, regained their breath and started chanting. Vodafone’s flagship store had been shut down, and it remained closed almost all day.

Sometime that afternoon two middle-aged, sharp suited men stepped out of a cab and stood behind police lines staring at the crowd blocking the shop doorway. They were two executives from Vodafone’s head office. They looked worried.

But, at that moment, there was no way they could have anticipated what would come next.

A sit-in that was meant to be a one-off got picked up on Twitter, captured the imagination of people across the country and went viral. Less than two months later and co-ordinated protests have rocked tax avoiders on high streets from Aberystwyth to Aberdeen. Vodafone have pulled their shutters down in more than fifty stores whilst Philip Green’s retail empire has seen flash mobs, blockades, performance art, one woman protests and, by the end of tomorrow, tax avoider-themed sports days and grand prix.

Tax justice is back on the agenda. But more importantly, the coalition’s rhetoric on the cuts has been exposed as an ideological con-trick. Across the country people have stood up, sat down and been dragged out of shops to say we will not accept this sham, we will not accept tax avoidance by the rich and we will not accept a cabinet of millionaires cutting services for the poorest and most vulnerable.

There is no doubt that these protests have represented something new. Twitter and Facebook have proved themselves invaluable tools with which strangers in cities hundreds of miles away can share ideas, stories, photos, energy, creativity and solidarity. On hashtags and in shop doorways, networks and friendships and encounters have emerged that will form some of the bedrock of the anti-cuts movement.

But Twitter and Facebook, however powerful, are just tools. The power behind them is the anger, indignation and passion of ordinary people up and down the country who have taken it on themselves to organise. So many campaigns rely on the premise that the less you ask someone to do, the more likely they are to do it. This campaign has proved the opposite. People who have never even been on a protest before have taken on organising them. Callouts have been written, posters pasted, ideas dreamed up, meetings arranged, resources created and shops shut down by people who have decided not to wait for someone else but to do it themselves.

On Oxford Street 78-year old Eileen Smith helped shut down Topshop’s flagship store. In Bury St Edmunds Alex and his Mum laid down in a Vodafone doorway, forcing it to close. In Liverpool a fifteen year-old girl organised an action and shut down a Topshop, before running home to revise for her GCSE the next morning. In Central London a man passing the protest on the bus jumped off to join in. Supportive passers by in Oxford posted food for protesters through the letterbox of an occupied Vodafone store. And the incredible Bryony Evens invented the One Woman Protest, an idea so successful she actually managed to get some tax back from Philip Green, even if it was only 74p.

Tomorrow, the Big Society Revenue and Customs hits the streets again and, this time, the tax dodgers are scared. People will blockade, picket, sit in, occupy, flashmob and shut down. We will make sure that everyone in this country knows that whilst George Osborne dismantles the welfare state, mega-rich individuals and corporations avoid £25bn in tax a year. We will deal another blow to the government’s lie that these cuts are necessary, fair or economically sane. Tomorrow is Pay Day. If the government won’t make wealthy tax avoiders pay, we will.

See you on the high streets.