This is a guest post by NHS Direct Action, a protest group organising creative direct actions against the privatisation of the NHS. 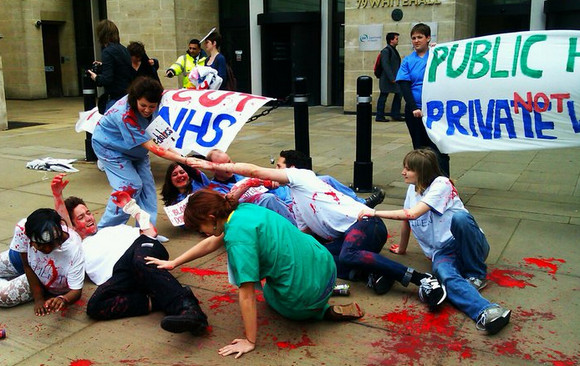 Cor·rup·tion/kəˈrəpSHən/Noun
Dishonest or fraudulent conduct by those in power, typically involving bribery.

The NHS is being sold and it’s going cheap.

The Health and Social Care Bill is set to open up the NHS to the private sector. Little is said about the profit to be made, and the bill is being pushed through under health secretary Andrew Lansley’s guise of ‘modernisation and the power of competition’.

Private healthcare companies, led by H5 (a pressure group of the five biggest private healthcare providers in the UK) have funded Lansley through his time in opposition and are adamant their investment will pay off. Chairman of Care UK, John Nash, gave £21,000 in 2009 to fund Andrew Lansley’s personal office. His wife offered a further £60,000 to the Conservative Party.

We say our health service can’t be bought.

As well as guaranteeing influence with cash incentives, the revolving door of Whitehall has seen the movement of private health executives between roles in government, the NHS and think-tanks. At a conference for ‘business opportunities post global healthcare reform’ held by private equity firm Apax partners, Mark Britnell- senior health expert to David Cameron, global head of health at KPMG and ex-NHS director general for commissioning and system management- stated that “the NHS will be shown no mercy, and the best time to take advantage of this will be in the next couple of years”.

We want the open opposition of the Royal College of Nurses and Royal College of GP’s, with their years of experience and acting in the best interests of their patients not their pockets, to be heard.

In recent months students groups and movements like UK Uncut have grabbed the headlines and our imaginations with a wave of occupations, demonstrations and creative protest. This discontent has spread to the health sector. We recently saw the largest gathering of health workers in over a decade march to save their hospitals. Groups such as NHS Direct Action have used creative and direct action to stage auctions, die-ins and impromptu occupations to highlight the involvement of the private sector and think tanks in writing this failing government paper. Only last week, Atos Healthcare in Cambridge was occupied in protest against the company’s role in reassessing incapacity benefit.

Give a minute, an hour, a day. Read the dossier. Douse yourself in fake blood (1 part water to 3 parts corn-flour and food colouring). Call for a vote of no confidence in Lansley. Question his true motives and the motives of those who pursue profit at the expense of health for all.

If you are opposed to privatisation and cuts in the NHS, then you are NHS direct action. If you care about the future of healthcare in the UK, then join us. Even if you have never protested or marched before, now is the time to act.

Let’s remind the government who the NHS belongs to.